The report on birds that occurred around Bridport in 2021 has just been published and can be downloaded from the link below. This report is a team effort by members of the Bridport Bird Club and others who sent records to the Bird Club.

This is the first of what is intended to be a yearly report, and if you wish to help make the 2022 edition as complete as possible, then please send your records to the bird report editor at peteforrest81@gmail.com. A map of the recording area covered by the report can be found on the 'About' page of this blog. 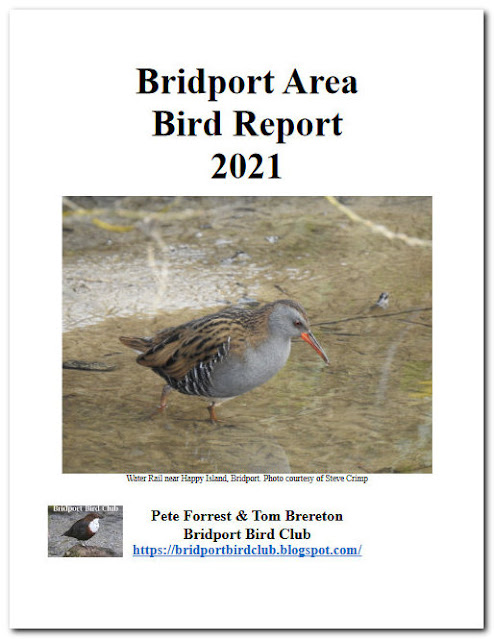 Today marks the publication of the report of the Breeding Bird Survey of Bridport and West Bay 2021, the first of its kind. For details, please see the press release below. And to download a copy of the 46-page report, please click the link below the cover shot. 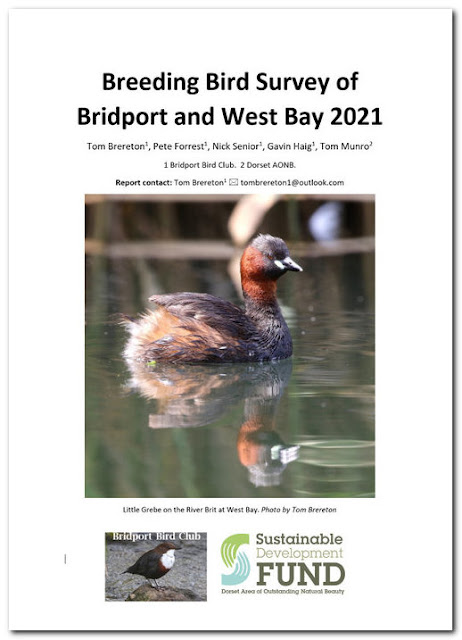 Bridport and the West Bay area are an important home to some of the UK’s rarest and most threatened birds, the first ever survey of the town’s breeding bird populations has revealed.

National rarities such as the Peregrine Falcon, the tiny Firecrest and the Hobby, a falcon that is a summer visitor to the UK, were all recorded in the immediate area.

And some of the UK’s most threatened species that appear on the Government’s ‘Red List’ including the Nightingale, Swift and farmland species Yellowhammer, were recorded.

The survey found 81 species breeding or attempting to breed within a mile of the urban areas of Bridport West Bay and proposed development land at Vearse Farm, far more than expected and 14% more than the national average for a 10 km square search area.

The survey, carried out last year by the newly formed Bridport Bird Club, is one of the most comprehensive reports every carried out on the breeding birds of an entire town and bordering countryside in the UK.

Surveyors walked more than 2,000 miles over a 70-day period across the area’s streets, parks, gardens, golf courses, farmland, cliffs and campsites. Added to these findings were 700 hours of night-time bird calls recordings.

Particular attention was placed on surveying Red Listed (rapidly declining and most threatened), and Amber Listed (declining, less threatened) Species of Conservation Concern, as well as the remaining Green List (not declining) species.

Some 14 Red Listed (representing 23% of the regularly breeding UK species total) and 23 Amber Listed species (27% of the UK total) were found.

But some of the survey’s findings were worrying. More than a fifth of species (22%) were either sporadic or likely failed breeders or at population levels close to extinction.

Of the 63 regular breeders with stronger population levels, a number of those such as Swift, House Martin and Starling are in steep decline nationally and potentially in the Bridport and West Bay area.

The results are important as they provide a baseline of the breeding birds living in the area and will also help inform conservation work in the Bridport and West Bay area.

Bridport resident, Dr Tom Brereton Research Director for conservation charity Marinelife, and Head of Ecology at Mapperton Estate lead the survey for the Bridport Bird Club. He explained: “Traditionally, birders living in Bridport used to leave the area to go birdwatching elsewhere. But the Covid-19 lockdown meant many local birders had stay and explore what was on their doorstep and what we found has been a real surprise.

“The Bridport area is actually quite good for bird species with some rare and threatened species breeding here. But conservation action is needed to give these and other species the space and habitat to thrive.

“The survey found that a number of species such as Yellowhammer, Reed Bunting and Linnet are clinging on in the area and without conservation help could soon go the way of other once locally common but now extinct species such as Grey Partridge and Tree Sparrow.“

Currently, there are no targeted efforts to conserve specific threatened breeding birds underway in the area, which is a concern given the many threats they face including agricultural intensification, recreational disturbance by dogs, predation by cats and habitat loss in gardens.  The group hope that the information provided in the report will help change that.

Tom Munro of Dorset Area of Outstanding Natural Beauty (AONB), which part-funded the study said: “We are delighted to have supported this project as it gives a fantastic baseline from which to measure conservation efforts.

“Though birds face many threats, the challenge is not insurmountable. Small-scale changes to management of surrounding farmland and town and village gardens could really help boost bird populations”.

Sir Philip Colfox, owner of the Symondsbury Estate and Founding Trustee of the charity West Dorset Wilding said “This report is as illuminating as it is detailed. For farmers and landowners deciding how and where to implement crucial measures for wildlife, the level of information in the Bridport Breeding Bird Survey is invaluable.”

The Bridport Bird Club was formed during then national Covid-19 lockdown. The area is home to many experienced naturalists and conservationists.

To download a copy of the report and for more details about Bridport Bird Club go to https://bridportbirdclub.blogspot.com/

A talk about the Breeding Bird survey is being held at the Tithe Barn, Symondsbury on ##/##/2022 [date to be announced]. Further details here https://symondsburyestate.co.uk/
at April 12, 2022

We are a small group of keen birdwatchers based on the beautiful West Dorset coast. Please click on the page link marked 'About' to learn more.